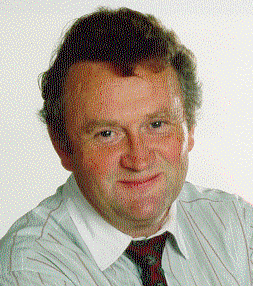 Mysterious are Gods ways.
After a breakup with my teenage girlfriend, I moved from Swedish westcoast small village Fritsla (70km east Gothenburg) to Stockholm 1976, where my two 7-year older twin-brothers lived.
After some months I found a flat only some 300 meters from one of the two UC-centers in town.
Coincidence – NO WAY!. It normally takes 10-15 years qeuing to get a flat (ANYWHERE) in central Stockholm.- Miracle of miraces. 🙂

I was introduced to the Principle Family by Aila Willits, in Stockholm Sweden 1979…
“Feed the hungry and thirsty” – I was pretty alone and spiritually starving after 3 years in my small flat.
Clever Aila and her church-friends invited me every weekend for a few hours of nice “love-bombing” together with tea and delicate sandwishes – ALL on ONE CONDITION! that I read one chapter DP aloud for her every weekend until Book finnished. 😉
I was hooked 🙂

… 1979 version of Aila from Finland (now living in Australia).
Below me and my wife, who also comes from Finland, was Blessed by True Parents 1982 in Seoul Korea.

During the 20 year (written in 1999) I as well as many others have witnessed and defended the Divine Principles, I have gained more and more understanding how everything is being fulfilled in this wonderful revelation.

The breakdown of communism, immorality spreading (not the least in my own country of Sweden). Ethnical conflicts and war. The same time as there is a strong trend towards globalization of economy and information (internet, global mobile telephony, EU, NAFTA, Euro=common currency). All adding up to a global structure of economy and a global world Family.

When we read the swedish newspapers and hear on the news of more extreme sexual violence and transgressions, my thoughts go to the correct sexual explanation of human sin that the Principle gives.

It is no mere coincidence this is happening now.

We clearly are living in The End of Times, as the Bible long ago predicted would come, with the living Physical Messiah on earth. And as he time and time again pointed out, we now see the fruit of the first Adam and Eves sin, in spreading adultery and sexual transgressions.

All unholy is disclosed! (Clinton-Levinsky affair)

All the cards are on the table in these webpages.

Everyone can read all prophecies that Sun Myung Moon had fulfilled during the 53 years (since 15 of August 1945) he has spoken.

No other then the Lord of the Second Advent has this ability to see and lead the human spiritual development towards an absolute sinless world. A true Heaven on Earth.

During these 20 years I have experienced many things, both positive and negative.

I am well aware of the warnings in Scripture about wrong teachings and antichrist appearance at the End of Times.

In this way you could say that in the beginning of the 80’s I evaluated the risk of spreading a false Gospel (?), against the risk of missing and rejecting the returning Lord, and not supporting his mission.

My conclusion was that the Spirit of Truth, that Jesus spoke of in Scripture, was in this message and the in man who brought it.

This was not an easy decision, since at that time 1979, there was VIOLENT opposition against the Unification Church all over Europe, and especially in the US.

It was like if there were 9 positive things and 1 negative experience within the movement. Then the 1 negative person got all the media attention and headlines in Sweden, regardless if it happened in Sweden or elsewhere.

My conclusion was that IF this is the Returning Lord then there must be strong spiritual evidence that confirms it. Like Jesus being well testified already at his birth.

As an answer to this thought I got a reference to the book written by the famous Arthur Ford, about his life as a medium. One whole chapter was about a stunning Ford-session during 1964-65, which was arranged by Bo Hi Pak for Sun Myung Moon.

This chapter had a clear testimony:

Mr. Moon is one of those who is directing the thought of people back to these simple Principles stripped of all superstition, stripped of all ecclesiastical and religious symbolism. He is doing exactly what Jesus in his life tried to do – what every man who has ever been a channel of revelation has tried to do. God has never had anything to reveal to man except these two things: ( 1) that God is and (2) that Man is a part of the Divine Creation. And what God is, in their concept, every man is in the process of becoming. Mr. Moon is not antagonistic – (in nothing he says).

This part of the text, especially the bold line, has become like a declaration of faith for myself over the years.

Still after almost 40 years (2019) following the DP-path, I am amazed at all World-wide Spiritual preparations for the Second Coming of Christ.

“It’s been a long time since I read it, but find its account of the Fall (happily prevented this time) in the middle book Perelandra to come often to mind when teaching or researching about our Chapter 2. The third book, with its restoration of marriage (among many other themes), is a great story of today’s providence…”/from Applied Unificationism

Like a Spiritual tsunami with long millenia buildup crecendoing 1945when finally the in physical world totally unknown korean MoonSunMyung took the public lead as Lord of the Second Advent!