What are your memories of holy days? 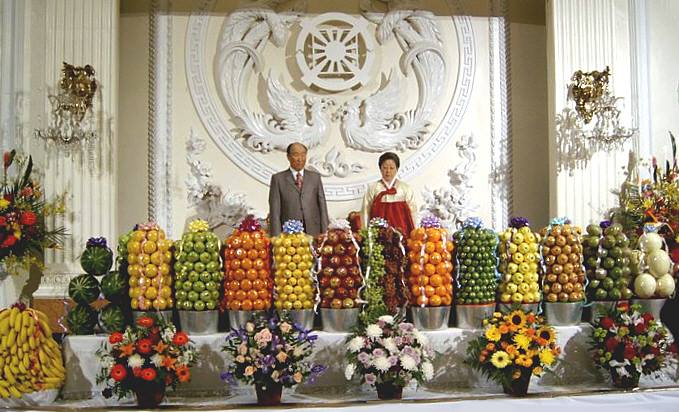 When I first joined, holy days were a welcome relief from the lonely front line battlegrounds. It was such a joy to be with brothers and sisters from all over the world, together as a family with our True Parents.

God’s Day was the only one of the holy days that was celebrated by the Western calendar, so it was on January 1st, New Year’s Day for the Western world.

My first experience of a holy day at the World Mission Center was after the matching in 1980. On arrival, the security brothers at the front door were swamped. The metal detector was up and running, and the ID check was challenging, as people were coming from all over North America, Asia, Africa, Europe and all other parts.

Once inside, if you needed a room, you joined the throng at the front desk. The hotel was always under construction and renovation, and a wide variety of rooms was available, to put it mildly. Your room might or might not have: running water, or water that stops running, a functioning toilet, carpets, carpets without mushrooms growing in them, curtains, light bulbs, etc. Beds and furniture were considered luxuries at the time. All a good Moonie needed at the time was a place to roll out a sleeping bag. TVs? Never.

God’s Day began with the midnight prayer. The Grand Ballroom would be packed with members, brothers on the right, sisters on the left. Many would come in hours early to be at the front of the room. Others would be sleeping off their jet lag, catching a bite to eat, or planning to be at the back of the room so as to be first to line up for the morning pledge service at 7am.

I remember arriving in time to stand just outside the doors of the ballroom 20 minutes before midnight.

There would be several thousand people in that room, three or four times the official capacity, and only maybe a dozen chairs for older members. You could fit so many more in sitting on the floor. People were packed in so tightly that, as Tyler Hendrix once put it, “If you’re touching four people, you’re doing it right”.

The new arrivals at the back would be edging forward, anxious to get in the room. This sometimes led to people being squeezed or almost crushed into the people already inside. Cries or shouts of “Don’t push!” would go up. Amazingly, I never heard of anyone getting hurt in all these crowd scenes.

As we neared midnight, True Father would appear. Col Pak would count down. At the stroke of midnight, Father would begin praying, his deep, raspy voice reaching out to Heavenly Father. A profound hush would be over us as we listened to him begin the year with God.

As Father’s first words vibrated into the silence, we could also hear the city erupting outside as people yelled, honked horns and screamed to celebrate the New Year. I felt myself in an oasis of calm and holiness while the city reeled in a drunken, sexual celebration.

Father finished his prayer, and spoke for 30 or 40 minutes, very brief for him. When he was finished, immediately the tide turned. People who had been pressing into the Grand Ballroom were now surging out. The social frenzy recommenced.

On holy days, you could meet people you never saw for the rest of the year, someone you were at 40 day workshop with, someone you fundraised with years ago, was there when you joined, etc.

Some immediately lined up at the velvet ropes to be in the front row for holy day pledge service at 7 am. Others flowed towards the bathrooms.

There was quite a line in the closest bathrooms. If you knew someone with a room, that was faster. But you still needed to get up there.

Then it would open in the basement, where more opportunists were waiting. House staff had to post signs that said “No more than 12 people” or something to that effect. (Am I remembering this right? Or was it 14?). This being New York, someone always tried to cram themselves in.

So the elevator would now be going up, and would open in the lobby to reveal passengers packed in so tightly they couldn’t move their arms. It would then re-open on the mezzanine.

So the patient, civilized members in the lobby would stand there while endless packed elevators would open and close their doors. For any room under the 12th floor, it was easier to take the stairs.

So, once you got to your room, you brushed your teeth and sacked out, calculating the balance between how much sleep you needed and how close to the stage you wanted to be. Some spent the entire night in line downstairs, others were content to come down and squeeze in the back in the morning.

We’d listen to Father’s speech, and hear the motto for the new year. Once that was done, we’d stand up, legs half asleep. For brothers, at least, it was ok to grab onto someone next to you if your legs didn’t quite work.

We’d then troop out to the mezzanine, where the holiday meal was served, boxes with bulgogi, rice, kimchee and vegetables. You ate where you could find a spot. Forget tables and chairs. A section of carpet by a pillar was good, cleaner than most, with a wall to lean on as you sat.

And you could look for your shoes now or later. If you waited, you were taking a chance. Out of several thousand people, there was a good chance your shoes looked just like someone else’s, and you wouldn’t see yours again. Some found a similar pair and put them on, causing a chain reaction. Others just went around in their socks and hoped for the best.

Some skipped the crowd scene and went out to a diner. The afternoon was in front of us, a rare stretch of free time before the evening entertainment at Manhattan Center. Some went to movies, many went upstairs to sleep, others stayed in the social feeding frenzy.

In the evening, around the corner to Manhattan Center. Doors would open around 6, an hour before the program started. We waited in the cold in our suits. When the security brothers opened the door, we surged for the stairs. You could wait for the tiny elevators, but you’d lose precious time. So up 7 flights it was, a breeze for MFTers.

Once in the ballroom, we sat on actual chairs, a rare thing in those days. The first year I was there, the room smelled of beer. MTV had booked the hall for their New Year’s party the night before. But what I noticed the most was the holy atmosphere of the place. I always felt that, coming from the ‘front lines’ to the WMC. Later, when I lived there, and worked at Manhattan Center, I noticed the holiness less and less.

As we waited for the show to begin, the air was abuzz with conversations. It was the one time you could catch up with members you hadn’t seen in months or years. People now in Wyoming, or the Phillipines. Years later, when we started televising the shows, I always wanted to see long shots of the audience, to spot people I knew.

It’s still that way. Going to church in a new place, or a rally or conference, I’m always scanning the crowd to see who I know. There’s almost always someone I’m glad to see, even for an introvert like me.

We’d wait for True Family to show up, from the door between the hotel and MC. We’d stand up and bow, watching the right balcony as True Parents entered with some of the True Children. They’d take their seats in the middle of the balcony, and the show would begin.

It was a variety show, with some ‘outside’ entertainers, musicians and dancers, and members as well. The MC was often Larry Moffit or David Eaton. There would be bands, skits put on by CARP or a workshop, first and second generation dance groups. The performing arts department would always have some songs or dances. It would vary from the professional to the totally amateur and corny. All the entertainers would come on stage for the final song, and True Parents would be invited to come down. Father and Mother would then finish the celebration with a song.

Father would sing first, then Mother, her voice sweet and high, his low and raspy. She sang well, and Father would sometimes whistle or sing off key as she was singing. She would laugh and continue. Father would usually invite us all to join in on the final song.

All in all, it was a great way to start the New Year, and a clear contrast to people drinking and partying. I was always reluctant to leave the atmosphere of the New Yorker to go outside into the streets, where mistrust of everyone replaced the family feeling we had inside, and you needed a fighting spirit just to cross the street.

The MacDonald’s across the street was often half filled with members, standing in line with the street people, tourists and drunks for our hamburgers.

What are your memories of holy days?